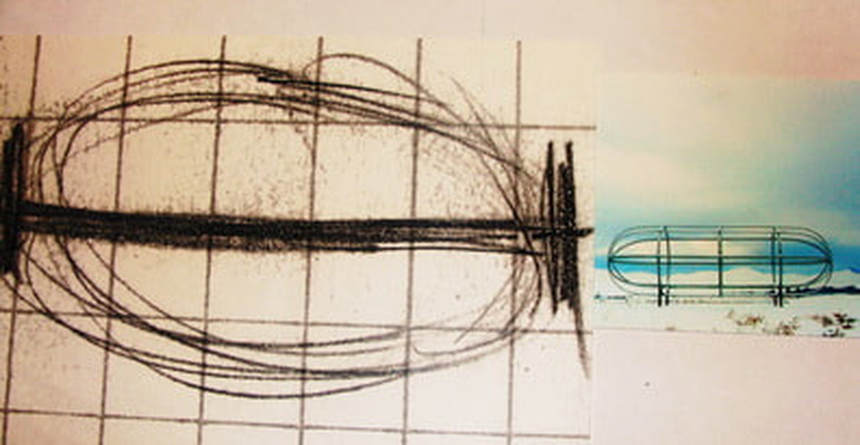 Sunday afternoons at three o'clock Bill and I would drive to an undisclosed  location and take a random photograph which we designated as the target.
Then we would slowly turn 360 degree taking several photos that captured the immediate surroundings. Remote viewers "see' the target from different reference points.
​
Remote Viewers, at distant and various locations, were instructed to draw the target at the same time that we were photographing each Sunday afternoon at exactly three o'clock.  Then they would sign, time and date the drawings and snail mail them to our home address in Helena, Montana.
Juxtaposed against a winter sky this metal art instillation (photo on right) caught Bill's attention on our Sunday walkabout. We waited around until exactly three o'clock and then took this photo.

​The Remote Viewer who produced the drawing on the left was at a location over a hundred miles away from Helena when this photo was taken. She drew this at three o'clock on a Sunday afternoon.  Her drawing even depicts the correct number of oblong metal tubes as well as the central tubes that bisect this  art installation  located at the Archie Bray Foundation in Helena, Montana USA.
​

Zach was by far the most gifted and consistent Remote Viewer.  In order to validate his results upon completion Zach would give his drawing to a third party who was not related to Zach.  This person was responsible to  date stamp the drawing, place it in a addressed envelope and drop it in a mailbox that Sunday afternoon.
MEMORIAL PARK
RED BRICK ART INSTALLATION AT THE ARCHIE BRAY 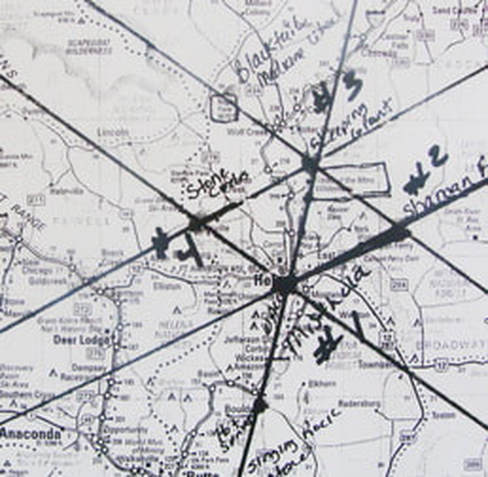 These remote viewing sessions evolved out of a conversation with Zach's grandmother, Stella, in the fall of 2004. Stella was known as local Wise Woman. Seeking her counsel and confirmations, I drew the ley lines on this map connecting sacred places in the vicinity of Helena as we sat in the back room of Stella's local business.

Stella's phone rang.  It was Zach. I had not met Zach who was nineteen years old at that time and according to Stella had already displayed remarkable psychic talent.

I was curious and intrigued by Stella's stories. Stella left the room as I set up strict protocols for the first remote viewing session.  I labeled the map with numbers.

​Then I tasked Zach to remote view the landscape at site #2 on the map that I was holding. Zach was instructed to make drawings and send the drawings by snail mail to my address.

This was the origins of the Earth Energy Grid Map as I understood it in 2004. I had recently met Stella for
the first time and knew that neither Stella nor Zach had ever been to the Shaman Rock which is in a
​remote location. See the EARTH ENERGY GRID LINES - GLOBAL PAGE.
REMOTE VIEWING BEFORE THE EVENT
Zach demonstrated extreme accuracy.  He hit every target according to protocol.  Then a time slippage occurred.

We received this drawing in the mail on Tuesday.   For the first time Zach had written a time notation above the drawing.... Sunday 3:00 PM. Zach accurately drew Sunday's target on the front. On the back of the same lined notebook paper was this drawing with the time notation.

I was totally perplexed. Bill believed in Zach. With the drawing in hand, Bill retraced the exact events of the previous Sunday after 3:00 looking for clues. We entered the Mexican restaurant in East Helena where we had dined that paraticular Sunday night around seven.   In the foyer of the restaurant, in front of the window was the ceramic fireplace in Zach's drawing. Zach had notated the time. This drawing was made four hours before Bill and I entered the restaurant.
​
Remote viewers can often see forward and backward in time along probable timelines. 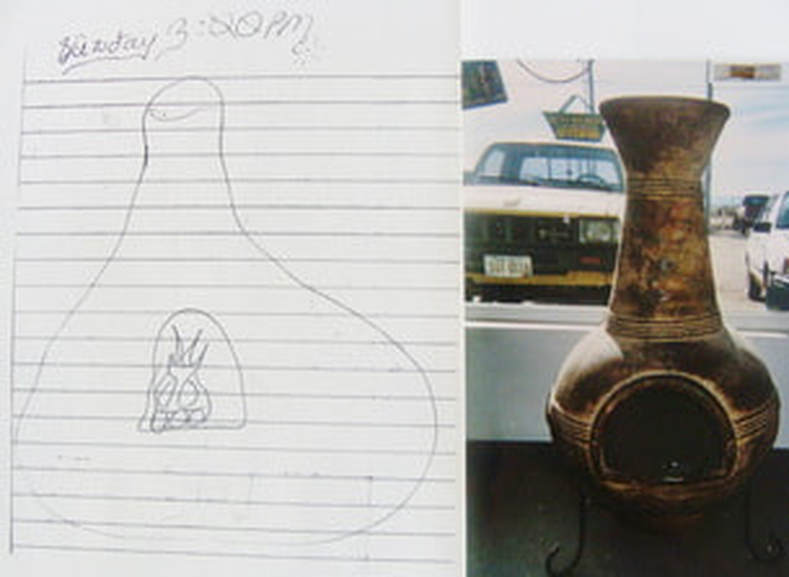 COPYRIGHTED BY JULIE RYDER 2011 THROUGH 2019
Proudly powered by Weebly