EPOCHS OF CONSTRUCTION AT THE MONTANA MEGALITHS
I am beginning to classify features located at the Montana Megaliths that were constructed by a series of advanced civilizations that inhabited North America in the far distant past. Some of the features are unique to a particular megalithic complex while other sites are a conglomerate of mixed intentional constructs.

This is my working theory of the Epochs in which various technology was utilized to construct the variety of features here in Montana. The Epochs are not necessarily sequential however I am naming them according to the type of construction. Nothing is "set in stone" and most certainly will be revised with each new major discovery. Geopolymer was utilized throughout the Montana Megaliths and so I do not use this as a proof point of one specific epoch.

There are polygonal features mixed with cyclopean stones utilized in the Monuments.  The Geosculptures are filled with examples of the other epochs.

I coined the word Geosculpture in 2018 which describes the First Epoch when Creator Beings sculpted their own shapes into the landscape. I have proven that Geosculputres are predictive in the discovery of megalithic intentional construction inside and adjacent to the these landscape features. I published my discovery of Green Avian Geosculputre before I discovered Eagle Mount Monument there.

Andrew Barker's research, some of which has been verified by satellite deep geoscans here in Montana, was the basis of the Mountain Figure nomenclature. Mountain Figures are entire mountains that are shaped like human/hybrid beings that face the sky. Andrew tells us that there is often a chamber under the orbit of the eye. Mountain Figures were formed from natural mountains that were enhanced into specific shapes during the Second Epoch in my theoretical time frame.

For the Third Epoch I have just coined the name Monumental Epoch wherein humongous rocks and mountain sides were enhanced to form human/animal shapes that faced the horizon and/or point toward other megalithic sites such as pyramids, megalithic complexes or industrial hydraulic plants like Geosquares.

The Fourth Epoch in my theoretical time line scenario has already been designed as the Cyclopean Civilization which proceeded the Polygonal Civilization. In several ancient megalithic sites, including the pyramids at Giza, cyclopean blocks are located under polygonal construction. Therefore the Fifth Epoch was named the Polygonal Civilization.
​
We believe that the Montana Megaliths have not been refurbished in at least the last 13.000 years since the Younger Dryas Event as no advanced civilizations inhabited this area according to the mainstream narrative.
​
The geomural on the surface of the Pink Vault matches a map of
​Pangaea before the continents split apart. 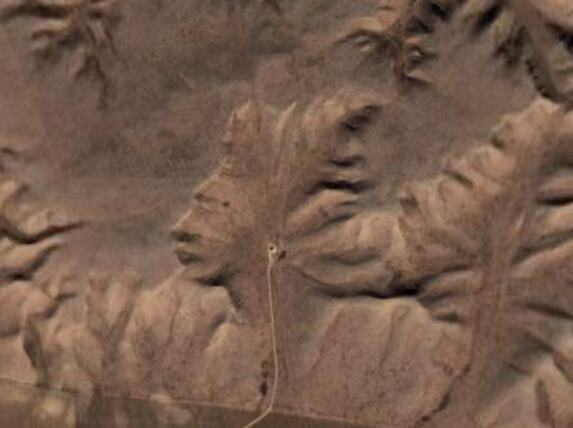 The Creator Beings sculpted their faces and the faces of their icons into the mountains so that they would be remembered forever. 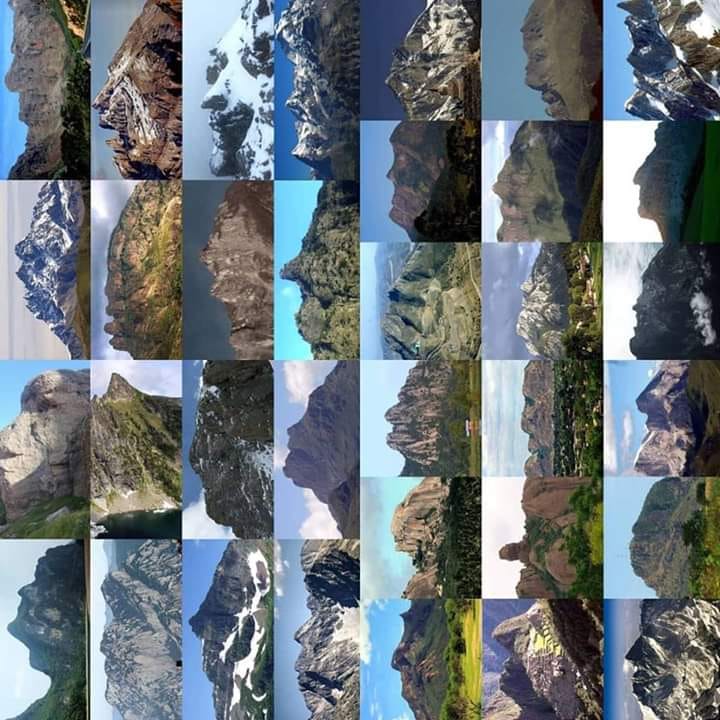 These Mountain Figures were named Nefer and Tut.  Nefer reminded me of a Pre-Adamic Being with a crown. Often the Goddess figure is "birthing" the male figure which is the case at Nefer and Tut in the Helena Valley, Montana USA. Mountain Figure Tut is located at Nefer's feet.

Andrew Barker posted on my FB page referencing this photo:  "Remember for the ancients snow and cloud is good as it shows the connection to the heavens. For them this would have been so wondrous . You are seeing it with 50000 years of wear!"
Link to my FB page:  https://www.facebook.com/julie.ryder.5095
Sleeping Giant Mountain Figure in the Montana Megaliths, USA
​Andrew Barker from Merlin Burrows has taught us about Mountain Figures which are mountains that have been enhanced into the shape of human forms. Andrew maintains that these are the oldest constructs on Planet Earth. Dolmens were later built to face these human silhouettes.

"I always take it that they are the sign of the first epoch i.e. Geosculptures are first epoch Atlantis. Which I currently believe to be 70,000BC but understand it may be considerably older," Andrew Barker recently commented. "Also I have devised a scientific measure of the probability a Figure is natural/non- naturally formed. Similar to the dolmen calculator. I need a statistic expert to work with." 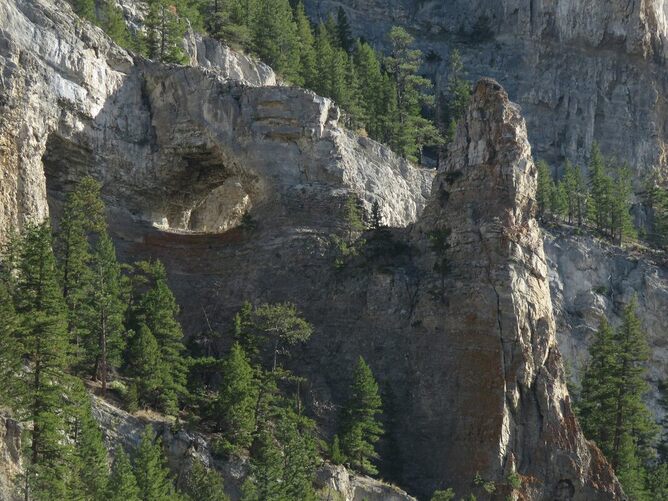 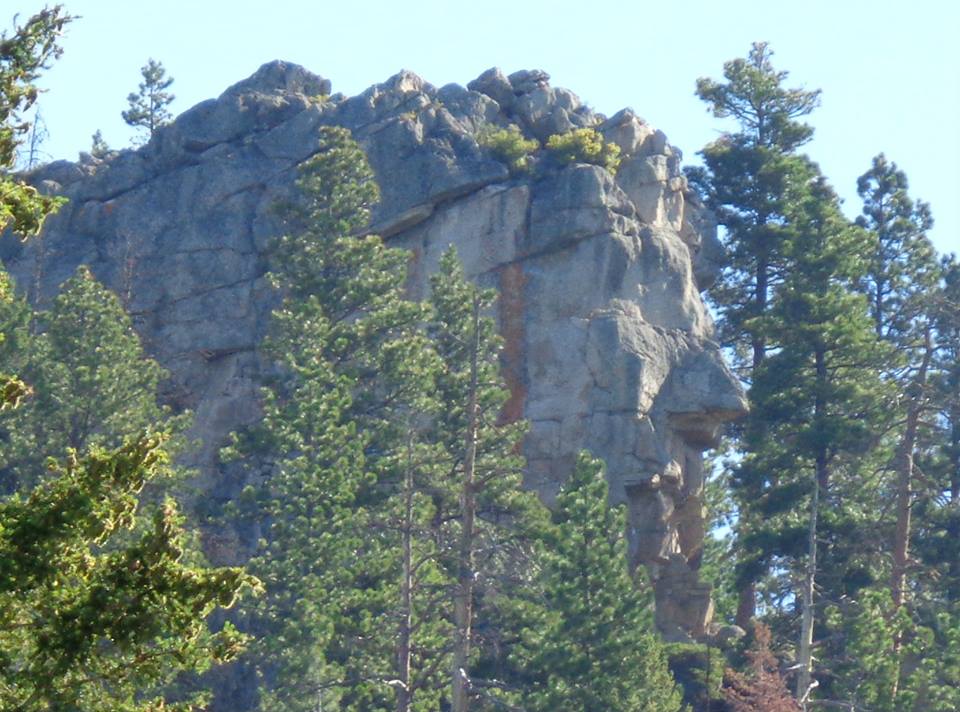 Mount Maya near the Tizer Dolmen Complex in the Montana Megaliths.
Discovered by Maya Nikolova from Bulgaria.
Photograph by Randall Monk

Satellite geoscans have identified the largest standing stone block in the world is at the Montana Megaliths and it is still standing.  Coated with geopolymer composed of minerals that are not from the immediate area,
Twin Flames is a duolith tower which is surrounded by a wall.   Weighing in at over 5,300 tons, cut into a bedrock cradle, and standing over 110 feet above the surface Twin Flames Duolith is located inside the Mysterious Eye Geosculpture. 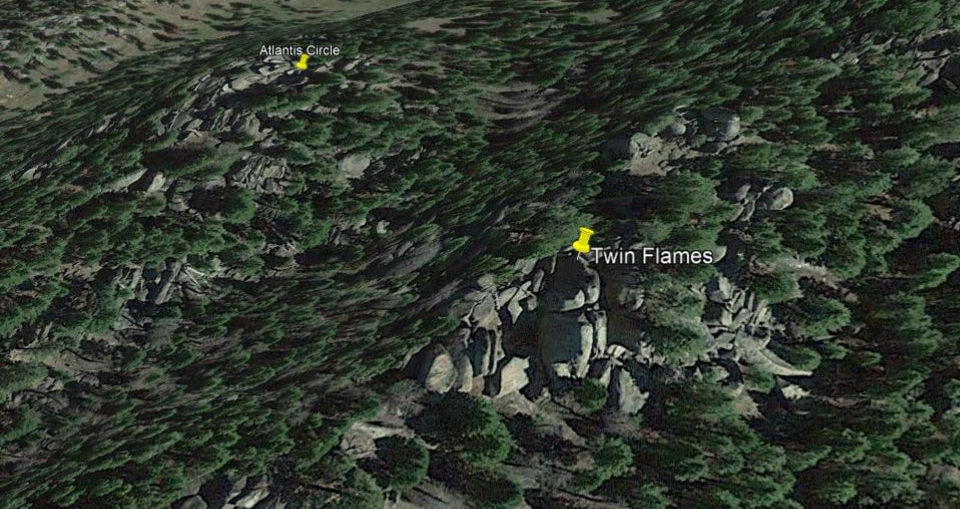 Polygonal construction of megalithic structures is the defining feature of the Fourth Epoch of the Montana Megaliths Civilizations.

Interlocking stones were fitted into jigsaw puzzle type walls, art features and towers. It is evident that in some places the internal infrastructure was piles of random rocks that were cemented together and then plastered over with a coating of geopolymer to form a smooth surface. An example of this method of construction is evident in the wall in Peru which shows smooth cyclopean style blocks that have been coated with geopolymer while stacked on top are random stones that have not been plastered over yet.

Although polygonal construction can be found in ancient sites in other parts of the world, here in Montana this technology was taken to a more sophisticated level. Three dimensional polygonal blocks formed artistic images of humans, animals and chimera.

Although polygonal construction can be found in ancient sites in other parts of the world, here in Montana this technology was taken to a more sophisticated level. Three dimensional polygonal blocks formed artistic images of humans, animals and chimera.
​
Ancient Polygonal Megaliths around the world:
http://forums.sherdog.com/…/ancient-megalithic-structures-…/ 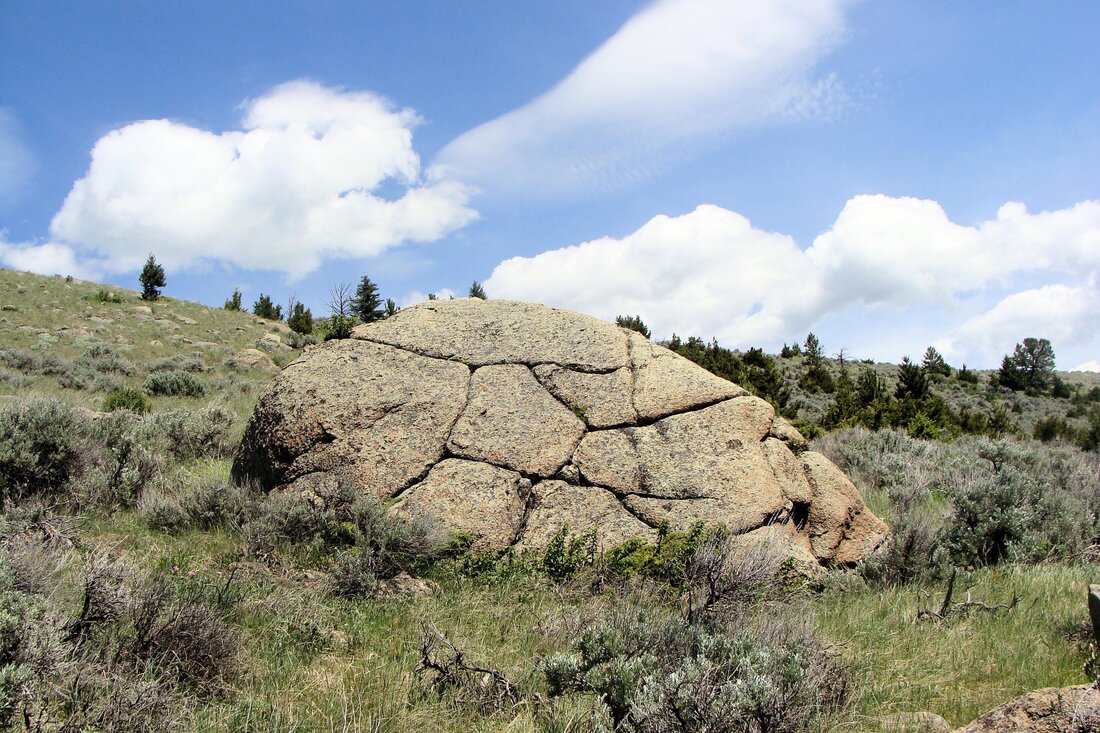 ​Initiation into the higher realms of consciousness in the ancient worlds took place in secret underground chambers or caves. Temple sites were often built over these sacred caves. Temples were constructed from selected stone that resonated at a high energy frequency often because it had a high quartz crystal content.

These Initiation Ceremonies have been handed down for generations in the Indigenous Cultures. Sacred mountains, caves and vision quest sites are known by the traditional elders for the high energy that these ancient vortex sites harness.

​In the book The Lost Art of Resurrection Initiation, Secret Chambers, and the Quest for the Otherworld, Freddy Silva dives deeply into the traditions of the Living Resurrection ceremonies.

Satellite deep geoscans have confirmed the largest megalithic intentionally constructed standing stones in the world are part of an oval wall in the Montana Megaliths in the USA. The stone used for the geopolymer coating is not from the area. 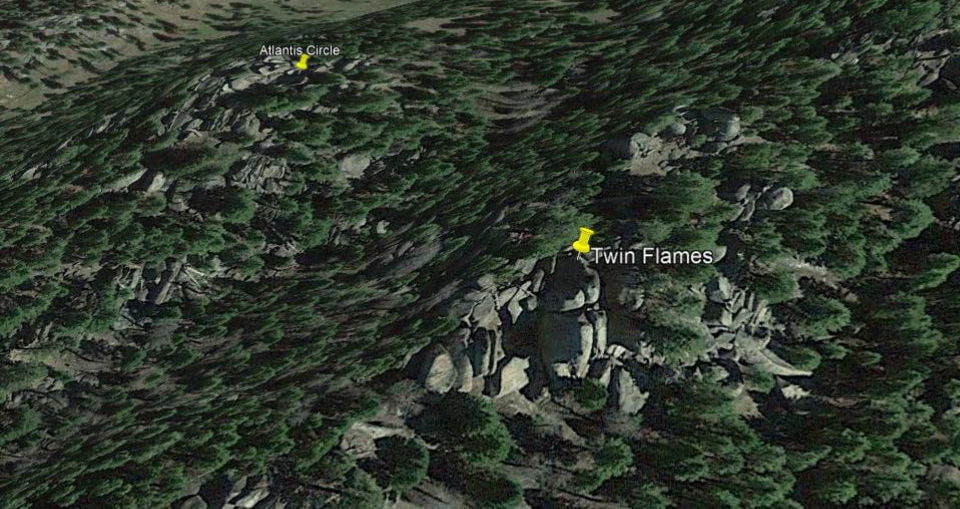 Twin Flames Duolith was constructed high up on a mountain ridge that forms the hair of the Mysterious Eye Geosculpture. Constructed of geopolymer concrete the curved base of these duoliths are set into a cradle carved into the bedrock. The uprights are perfectly balanced in the cradle which enables these cycloopean duoliths to rock and then come back to center after earth movements. Semi-circular sliced support dikes, built to absorb horizontal earth movements, were placed on downhill side. 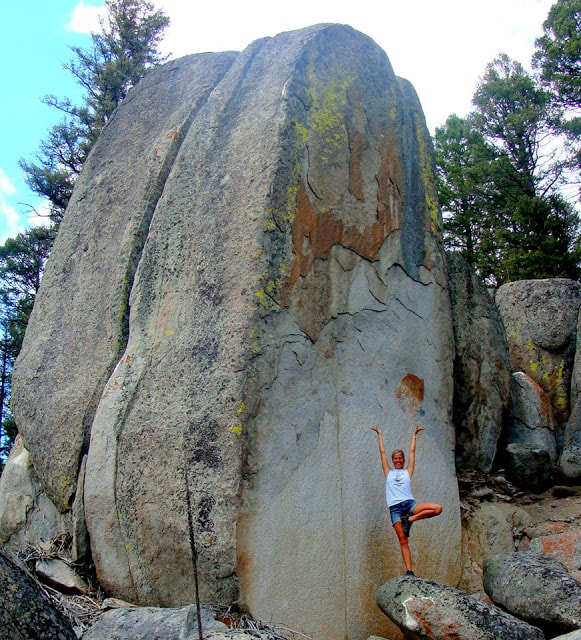 Meredith at the Star Fire Duolith
​
Star Fire Duolith at Giant's Playground is only around 50 feet high. Two cyclopean uprights are cradled side by side in a semi-circular cut out.  A semi-circular sliced support dike of gray geopolymer was built to absorb horizontal earth movements therefore placed on lower side.
Discovered by the Tesla Team in 2017, Gift of the Goddess Dolmen is also located in strands of hair of the Mysterious Eye Geosculpture. Again the semi-circular base of two uprights is held in place by a cradle and a sliced roll of geopolymer concrete dike in front. 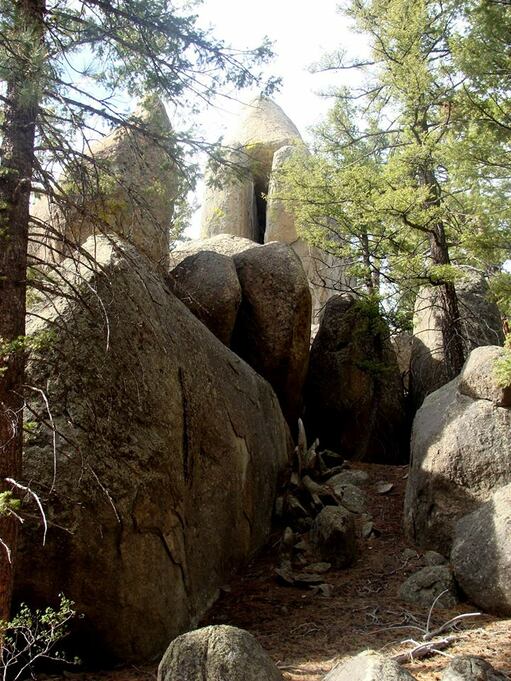 Gift of the Goddess Dolmen is also located in strands of hair of the Mysterious Eye Geosculpture.

On top of a mountain overlooking Giant's Playground in the Montana Megaliths an intriguing pattern appears on Google Earth. Perfect circles within squares, symmetrical and parallel wide walls forming rectangles and squares patterns are obvious. Layers of rectangular stepped walls with a circular dome at each corner is a primary feature that I have named Step Plaza Domes, Parallel walls ramp down into a river valley on one side and an ancient river bed on the other side.

LIST OF MONTANA MEGALITHS FEATURES AND SITES
As of November, 2019
For the Record