ACE accesses pattern recognition skills in order to make remarkable discoveries at the Montana Megaliths. Enhanced abilities are often demonstrated when he takes a photograph or explores a megalithic site and then explains what he perceives in drawings, dramatic short plays, and song lyrics.   We later figure out that he was right on target and light years ahead of us.

ACE first visited the Tizer Dolmen in 2014 when he was nine years old transported there on the shoulders
of a Yoga Teacher. Two years later ACE reminded me that on his first visit he paid no attention to the huge dolmen but instead climbed up on the rocks and began singing.  In 2016 we experienced human voices transposed into ultrasonic tones at the Tizer Acoustic Chamber exactly where ACE had been singing two years before.
Finding the sonic knobs at several Montana Megaliths sites has become his current mission. ACE scampers across fallen rocks and climbs up into passageways.  Suddenly the earth moves under my feet as his voice ranges up and down the scale until he reaches the exact frequency that creates a reverberation on each individual sonic knob. 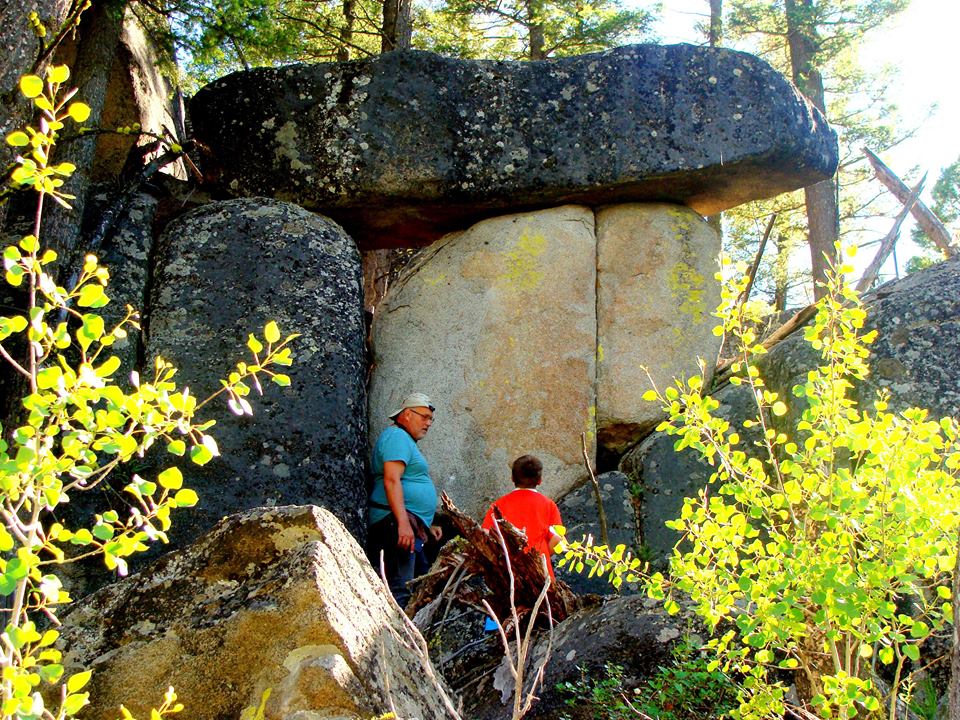 ACE deciphered the image superimposed over the Pink Vault and declared it was an map of Pangea in the summer of 2017.  ACE was 13 years old.

​Andrew Barker asked ACE what he thought the darker "ochre" raised image was. ACE declared, "It's a map." Andrew asked where Montana would be. ACE answered, "It is a map of Pangea." Simple as that.

RIDING IN SEARCH OF MORE MONTANA MEGALITHS IN THE USA

ACE and his friends ride the back roads of Montana in search of more Megaliths.

Star Puzzle Complex was discovered, explored and documented by ACE when he was eleven years old. Scrambling under and over fallen trees, then climbing towering walls for a better view our intrepid explorer discovered fossilized gear-like protrusions, towering terraces, and a few curved smoothly polished granite constructs of an ancient civilization.

Located along a ridge line which forms a strand of hair on the Mysterious Eye Geosculpture, Star Puzzle is located near Mystery Rock Prime in the Montana Megaliths

See more about Star Puzzle on this page:  Megaliths in Montana

See more about the Mysterious Eye Geosculpture on this page:  Mega Correlations

​pattern recognition even under forest cover 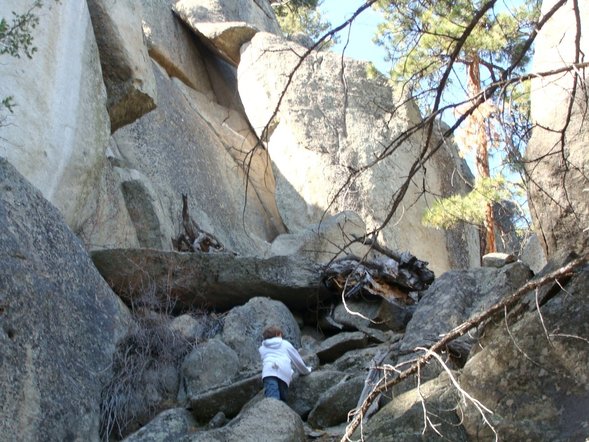 In the spring of 2016 during our first time exploring Mystery Rocks Prime ACE found the corridor, climbed up on the second terrace and took astounding photographs of the forested valley below.  All he said at the time was, "It's down there."   One of ACE's photographs was sent to the Merlin Burrows Team which subsequently led to the discovery of vast megalithic features, stone circles, megalithic walls  and marker stones pointing the way to even more.
ACE explored adjacent sites in the Mystery Rock Complex. 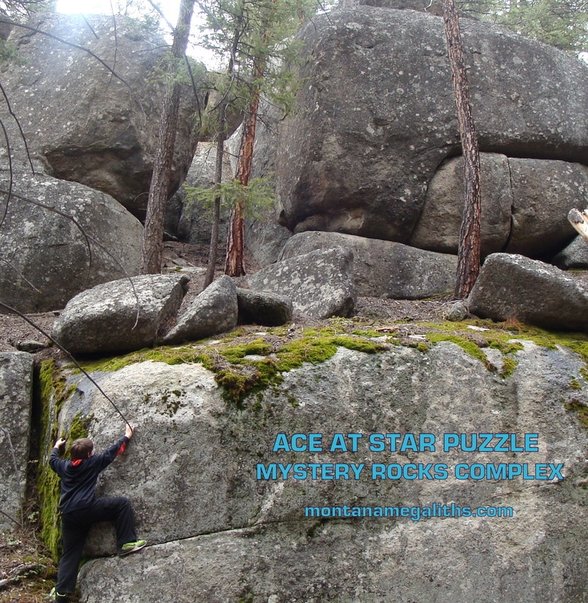 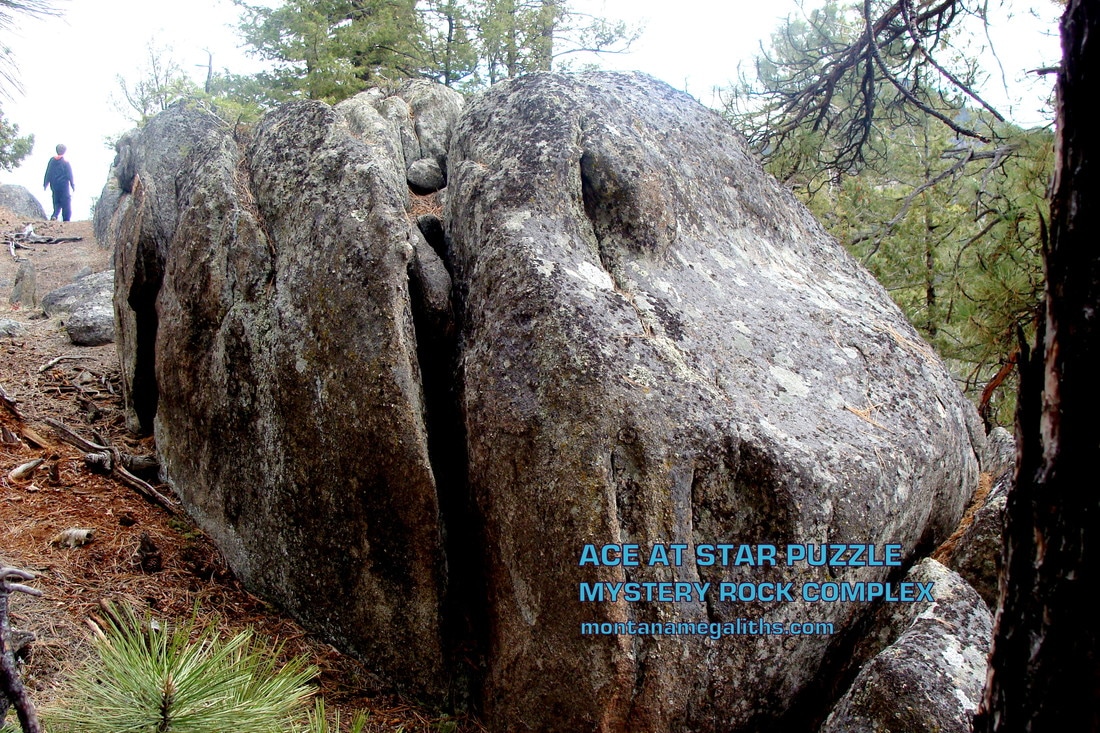 Located at the outside corner of the right eye of Green Avian Geosculpture the top of Hogback Mountain is a magical place. There are actually sea animals and ancient sea shell fossils found there.
Bill has been celebrating the Summer Solstice on the top of Hogback with his motorcycle buddies for years. Exactly one year after my 50th birthday, which was a turning point in our lives, I journeyed to Hogback to seek solace and a vision. I was gifted with a sea anemone fossil which I later gifted to the sweat lodge to become the central rock.

We took ACE to Hogback to celebrate a very special occasion when he became an official member of our family and he lit up the place. Hogback Mountain can be seen from the Helena Valley in Montana as it is the highest mountain peak at 7,808 feet elevation.

Bill and I had been visiting Hogback Mountain for twenty years and then in December of 2018...three months ago...I was doing research on Google Earth and found the Green Avian Geosculpture. I discovered that Hogback Mountain looked over the canyons that form the right eye.

Since there was no snow yet, I began exploration slowly driving up the road along the back of the head which terminates at Hogback Mountain. An eagle flew over and I followed it to Eagle Mount Monument just as the sun set. When I first looked up and spotted the Eagle Eye, I was so overwhelmed that I fell to the ground laughing, crying and greeting the Eagle. Gifts and offering were made.

I returned the next day with a scope and took photos of the right eye which proved to be a perfect raised circle with an inset golden stone pupil. The detail is astounding viewed through the scope. 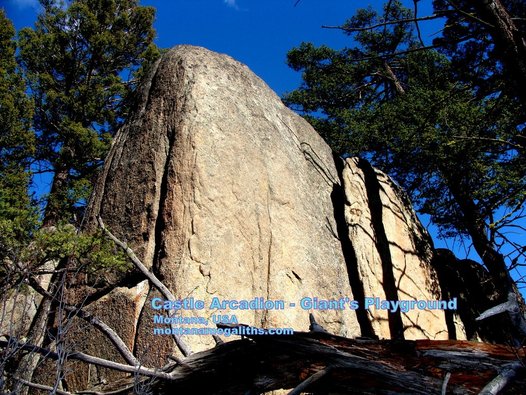 Bill and ACE explored the area below Castle Arcadion. ACE climbed down inside and discovered underground granite pillars. In order to demonstrate perspective ACE photographed his friend.  His friend's right hand indicates a 90 degree corner leading to another corridor.
​ 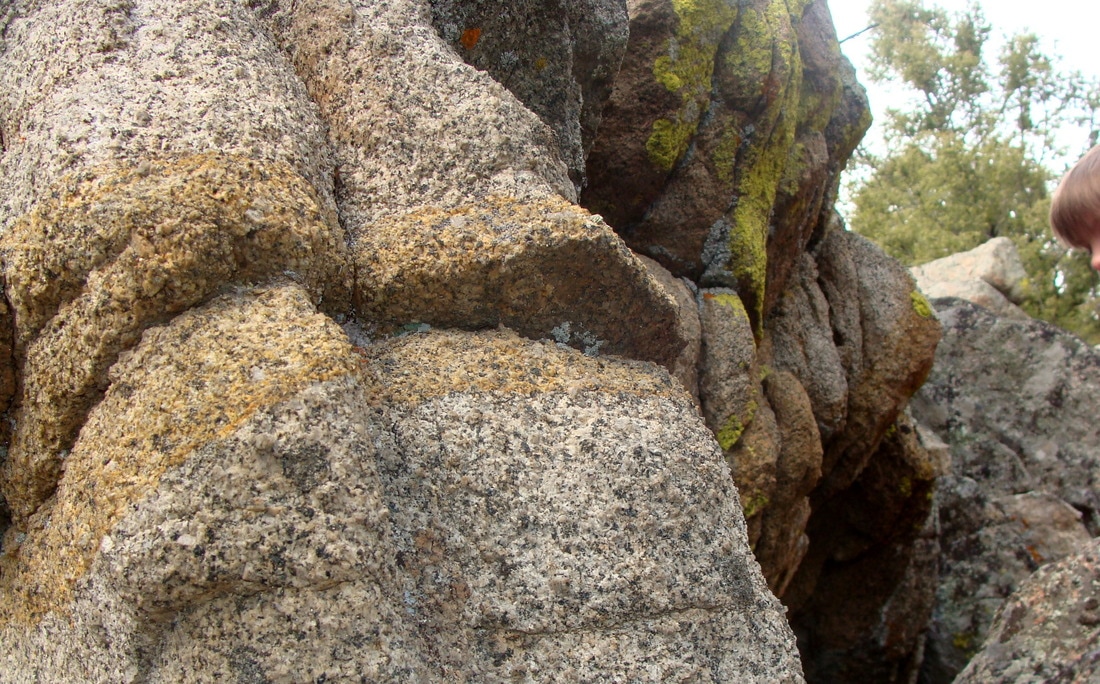 ACE engages in a stare down with the Robotic Watcher that has not blinked in tens of thousands of years.
​

WORLD WIDE ANCIENT CULTURE
As we are gaining traction on proof points that the Montana Megaliths are extremely ancient...perhaps even Pre-Atlantis...the matching game has gone world wide. Researchers are sending photos and data that match what we are discovering here in the USA. Point by point we are accumulating a preponderance of evidence that the Montana Megaliths were once a vast metropolis in a world wide highly advanced and very ancient civilization. 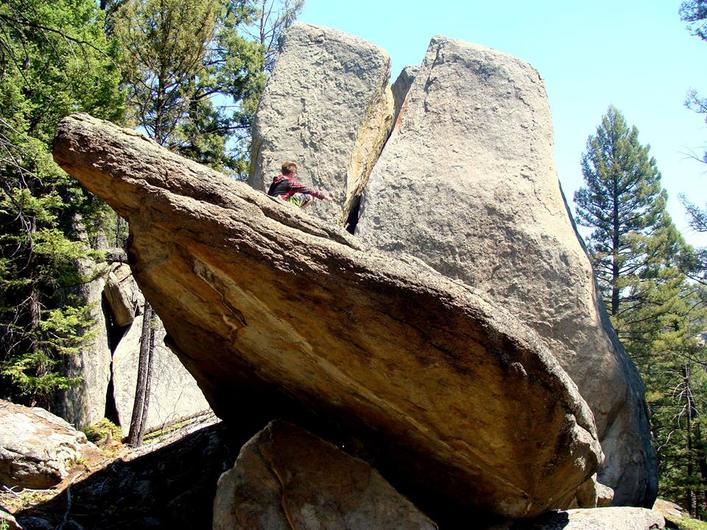 COLLABORATION WITH OTHER EXPLORERS 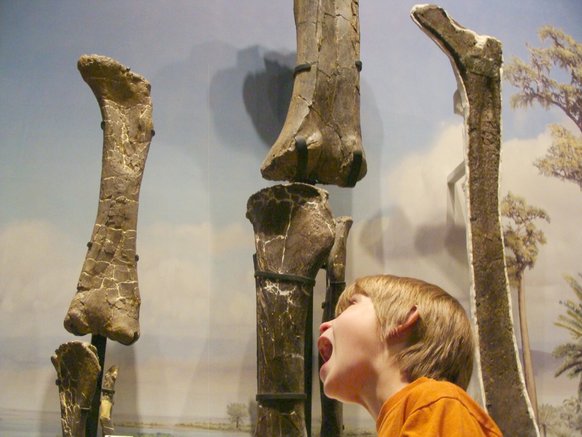 View from all possible angles.
​ 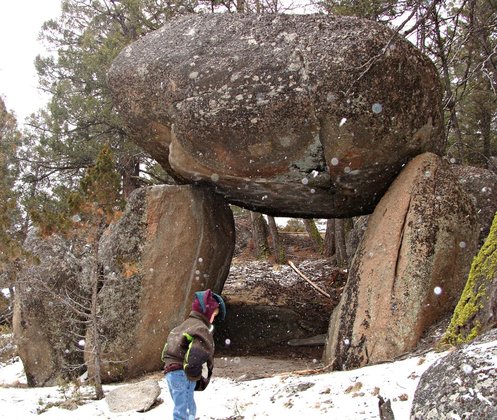 Seasonal changes in light and shadow affect perception of the Researcher.  Experiment results vary based on who is observing the experiment. 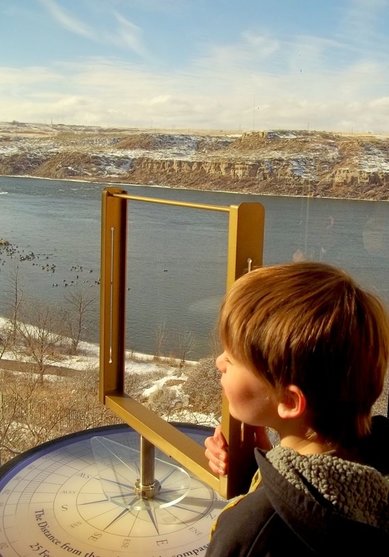 Circles and spheres are repeated patterns in the wheels of time

LISTEN TO THE WISE ONES 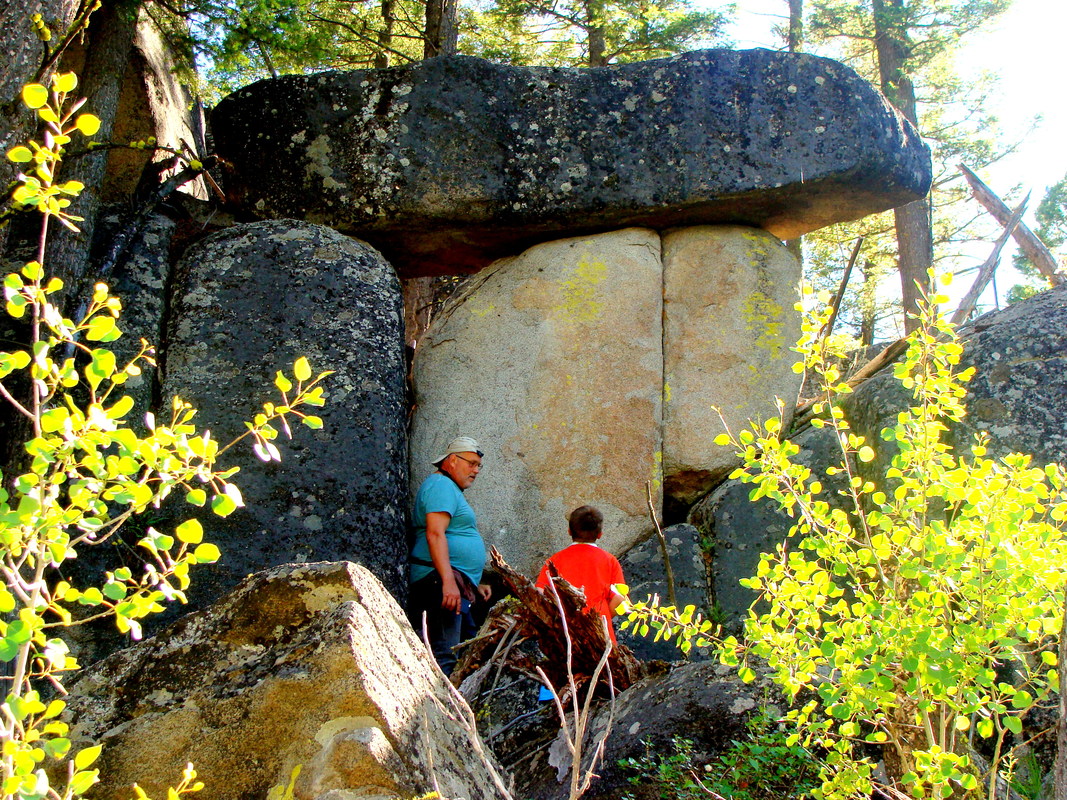 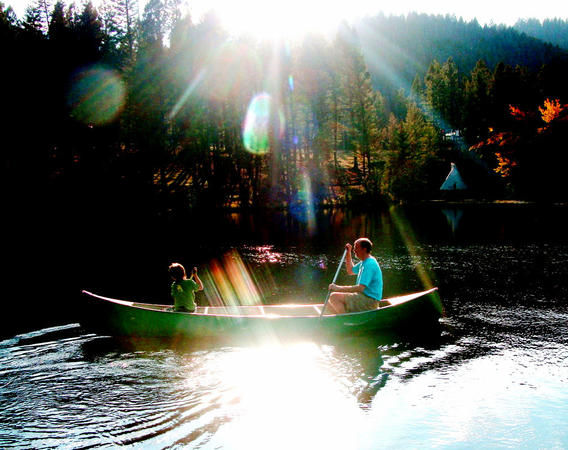 ​OFF AND AWAY ON ANOTHER ADVENTURE of discovery 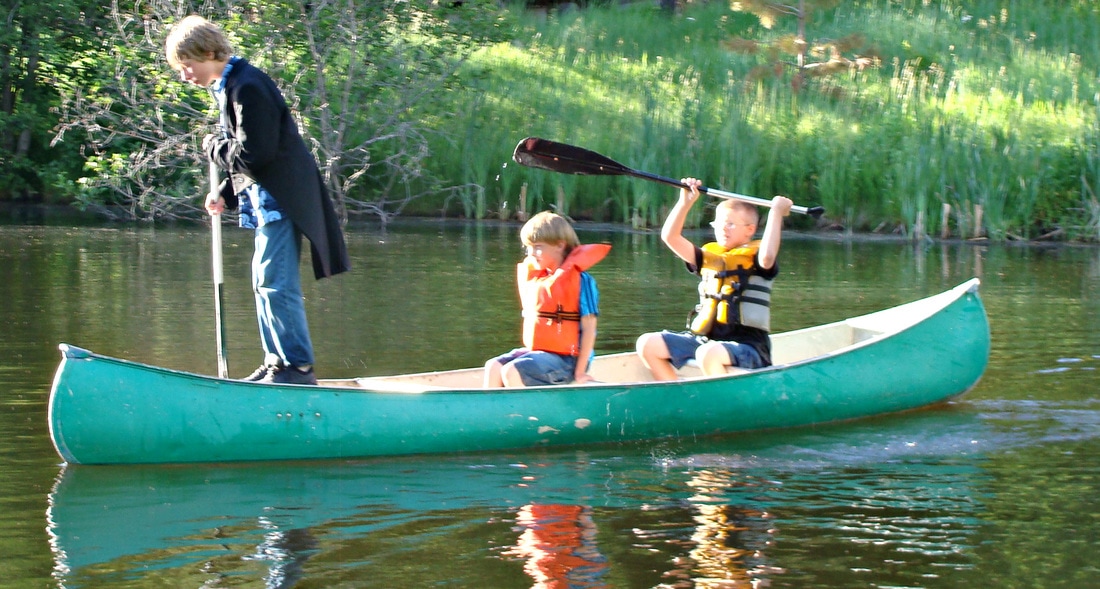 ​COPYRIGHTED BY JULIE RYDER 2011 THROUGH 2019
Proudly powered by Weebly